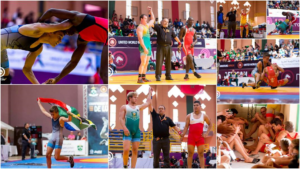 With the final group of wrestlers having returned after a very successful performance at this year’s continental championships in Morocco, Marrakesh earlier this week we would  like to congratulate every athlete, coach and proud parent for their achievements at the championship this year.

The cadets kicked off the campaign with an excellent performance taking 5 gold, 3 silver and 2 bronze medals. They also took the Freestyle Cadet Team Trophy.

Newcomer Fernando Booysen (U/42kg) opened the cadet freestyle medal count with a gold at his very first Continental Championship.  This was an exceptional performance not  only because it was his first Africa, but at the age of 15 he was two years younger than both his opponents.

The next four gold medals came from our group of final year cadets. These young wrestlers are building on an already strong youth and cadet foundation and it is looking good for  them next year when they participate at Junior Level.

Three of the cadets were selected to participate in the More Than Medals camp which took place after the Cadet Championships in EL-Jedida at the newly opened Moroccan Olympic Training Facility. The initiative driven and organized by Aka Vincent, United World Wrestling development officer for Africa, is aimed at developing young athletes from around the world into well-developed sportsmen and woman. The camp not only focuses on performance on the mat but teaches them life skills that can be used off the mat as well.

Fernando Booysen, Edrich Nortjie and Johny Smit, just returned from the camp together with their coach Reinhard Bosse, who successfully completed the UWW Level 1 Coaches Course which is hosted in conjunction with the More than Medal Camp. Reinhard is the 3rd of our coaches to complete this Course in the past two years. He is also able to boast with achieving the highest mark at this years course.

As part of the camp Fernando and Edrich were selected as part of “Team Africa” who wrestled a duel against an Iranian Cadet Team in as part of their preparation for an upcoming competition. Edrich beat his Iranian competitor in the first round with a well-executed Quarter Nelson but Fernando was unfortunately beaten by his in a hard fought bought which went the full two rounds.

Not to be outdone by their younger team members, the junior team wrestled well during the Junior Championships narrowly missing out on two or three gold medals in the finals. They returned home with 5 silver and a bronze, which is one of the better performances by a junior team in the past few years.

The medal winners are as follows:

The junior also came home with a team trophy when they placed 3rd overall for the Greco Roman division.

Our small Senior Team with only three freestyle, one Greco Roman and one Woman’s Entry managed to wrestle two medals in the freestyle division.

Hein Jansen Van Rensburg (U/86kg) won a bronze medal and Martin Erasmus (U/96kg) won a very courageous silver medal against his Nigerian nemesis who he beat in 2015 Continental Championships and lost to at the All Africa Games later that year. So at 2 – 1 Martin definitely has a score to settle when the two are set to meet at the Commonwealth Championships later this year.

The team’s overall medal tally of 18 for the competition consisted out of 5 Golds, 9 Silver Medals and 4 bronze medals.

Well done to all and look forward to an even more successful Championship in 2018!