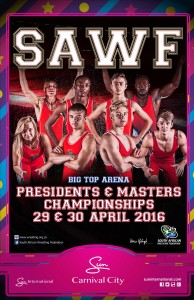 The championship will take place from the 28th till the 30th of April 2016 and promises to attract the best wrestlers from around the country to compete for glory.

To be crowned SAWF Presidents Champion is one of the highest honours youth and junior wrestlers can compete for and it is only fitting that this year’s championship will take place at a world class venue such as the Big Top Arena.

SAWF Media representative, Ms Gussie Bartlett, says that the opportunity to host at the Big Top Arena is a huge step for South African Wrestling on the road to making the sport more accessible to the public.

She says that facilities of this high standard can only improve the image and raise the profile of the sport in South Africa.

It is also in line with the huge drive, internationally, by United World Wrestling to make the sport more spectator friendly and increase participation amongst the youth.

The event will also host the SAWF Veterans Wrestling Championship and the SA Veterans’ Masters Games (wrestling event), which will help celebrate some of our past champions who have gone on to represent South Africa past senior level competitions. Amongst the participants will be past SAWF President and 10 time Veteran Word Champion Dr Willem Putter.

The Veteran’s wrestling initiative, driven by Dr Putter, has been extremely successful over the years and is a lesson to all athletes that you can participate in your sport for many years and achieve success at various levels.

The SAWF would like to extend our appreciation to the management and staff of Carnival City for the opportunity to host our Championship at a world class venue.