Willem Giliomee and Charles Villet will be representing South Africa at this year’s Continental Championships in Algeria.
Willem is the current chairperson of the SAWF Referee’s council and has recently been promoted to a Category 1 United World Wrestling Referee.
Charles is the current Vice Chairperson of the council and South Africa’s only IS (International Superior) Referee. Charles is working towards making his 2nd Olympic Games appearance at Tokyo 2020 and was recently awarded the prestigious United World Wrestling Golden Whistle as the best international referee in 2019.
Both will be attending the United World Wrestling course starting on the 2nd of February 2020 and will be sharing their knowledge and experience with the rest of the South African Referee corps. Unfortunately Charles was not present at the media day 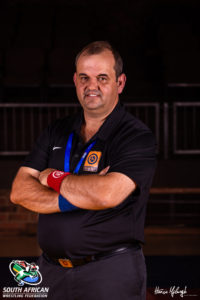